When Frits van der Kuyp, MD, started working here in 1969, one of the most iconic buildings in MetroHealth’s history wasn’t even open. “I built the Towers,” he jokes. He’s now witnessing MetroHealth's Transformation.

What’s been most important to Dr. van der Kuyp isn’t the buildings, but the people. “I’ve been very fortunate to work with the people here and to see some impact with patients,” he says.

Dr. van der Kuyp, former director of the Tuberculosis Program, has been a part of the MetroHealth community for 50 years. His colleagues recently marked the milestone with a celebration that featured treats, hugs and gratitude for his desire to continue sharing his knowledge. Although he officially retired “a few years ago,” you can still find him in the TB clinic a couple of Wednesdays a month, where he reviews cases and attends conferences. 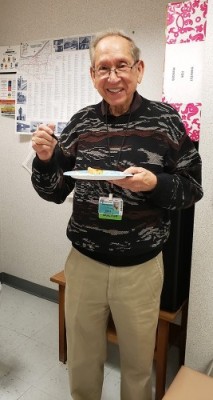 “Dr. van der Kuyp has been a national leader in the care of tuberculosis,” says Catherine Curley, MD. “He participated in numerous public health trials that later established the standards of care for both the treatment and prevention of tuberculosis. It is a privilege to work with him and to learn from him. Dr. van der Kuyp is also a skilled teacher. He has taught generations of young physicians about the interpretation of chest X-rays, diagnosis and treatment of tuberculosis, and also occupational lung diseases."

Dr. van der Kuyp says his work at MetroHealth has been rewarding. “I’ve had an opportunity to start an observation program (for TB patients). At other places, the standard was to just give people medicine; a large number of patients didn’t take their medicine. But when I came here we started a program to observe treatment. We were one of the first, and this later became a standard.”

He says the most fulfilling aspect of his work has been those changes in care. “TB is a public health problem. We’ve been able to treat and help a very large number of people and hopefully been able to prevent others from getting sick. We emphasize the preventive aspect. In TB, that’s a good thing.”