A 35-year-old photo, a preemie and the doctor who saved him 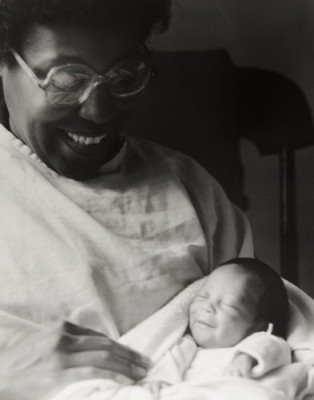 The photograph is extraordinary: A young mother holds a tiny baby on her lap. The newborn, eyes closed, is basking in the love of mom with a smile of pure comfort.

Brandon Agnew has always known about the photo; it’s been on display at his parents’ house for as long as he can remember. He’s the baby with that remarkable smile.

It was taken in late spring 1982 by Dr. LeRoy Dierker, the beloved obstetrician who delivered – and photographed – thousands of babies during his more than 3½ decades at MetroHealth. Dozens of his patient portraits adorn the walls of the Women & Children’s Pavilion and Labor & Delivery.

When Brandon found out that a framed print of the photograph was on display, he decided to do something special: He reached out to MetroHealth and asked if he could gather his mother, who was also born here (when we were City Hospital), and his son, born a year ago at MetroHealth, to take a new photo next to the 35-year-old photograph.

An updated image – three generations born at MetroHealth – would not only be a keepsake, it would send a message.

“I wanted to take a picture with my mother, to show the progression, to show that we’re healthy,” he said. “I was a premature baby, and I’ve grown to full adulthood. You always wonder: What happens to the kids on the wall? I wanted to memorialize that, for my mother and my family.”

On December 28, the Agnews arrived on Main Campus. Surprising them in the lobby was none other than Dr. Dierker.

“You met me before,” said Brandon, shaking his hand, “but I’ve never met you.”

As family members took turns posing with the portrait in the hallway on the second floor of the Women’s Clinic, news traveled quickly that Dr. Dierker was back in the building. Staff members stopped by to say hello, share a hug and marvel at the unique reunion.

Brandon’s mom, Hollace Agnew, said her pregnancy with Brandon had been rough. She had placenta previa, a dangerous condition in which the placenta is positioned low in the uterus, causing heavy bleeding for the mother. She was on bed rest for two months, with Dr. Dierker trying to keep her from delivering as long as possible so Brandon’s lungs could develop.

It got too dangerous for mom, so Brandon was delivered two months early, in March 1982.

He weighed less than three pounds and remained in an incubator for more than six weeks.

She remembers well the day Dr. Dierker snapped the photograph.

Dr. Dierker said he remembers the Agnews and taking the memorable portrait. Even in retirement and during the holiday season, he makes time for these reunions.

“They make me feel great.”

Dr. Dierker, who was inducted into MetroHealth’s Hall of Honor in 2014, estimates that he photographed roughly 3,000 babies and their parents. The prints were done on archival paper and remain in pristine condition.

“They’ll always have this memory. The photos will outlive me and outlive them,” he said. “That’s nice.”

Brandon, who works as a specialist in RTA’s Office of Equal Opportunity, said he cherished the opportunity to pull Dr. Dierker aside in the hallway.

“I was glad to be able to meet him and say thank you for this,” he said. “If he had not taken the time to try to develop my lungs, to work with my mom to make sure I was healthy, I wouldn’t have a wife, I wouldn’t have kids, my parents wouldn’t have grandkids.

A 35-year-old photo, a preemie and the doctor who saved him