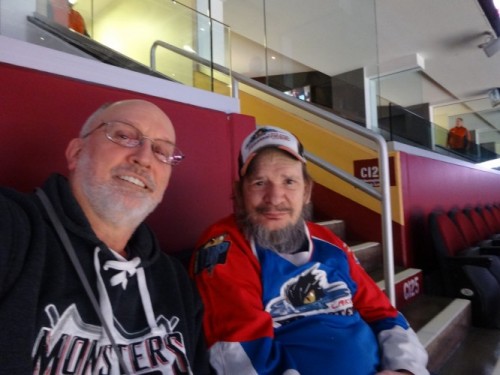 He’s been volunteering since the summer of 1980 when he was 27 years old. That  makes him MetroHealth's longest-serving volunteer.

“I went to the Cuyahoga County Nursing Home on Franklin to tell my grandmother’s friend that she had died,” explains Dennis. While there, a woman mentioned the need for volunteers.

“I really enjoyed taking care of my grandmother and figured it would be a good fit,” he says.

The fit was better than most marriages, lasting 39 years and counting.

As residents have come and gone at the Elisabeth Severance Prentiss Center for Skilled Nursing and Rehabilitation, Dennis is the one constant.

Another constant is Dennis' attendance at Cleveland Monsters hockey games.

He’s a season ticket holder and enjoyed the games with his mother and aunt. He made sure their seats were always high up in Section 30, to avoid the steps.

That’s where they would always see another fan. He attended every game. “He would just sit there by himself,” says Dennis. “Always in seat #1 Section 30.”

As fate would have it, in 2016, Dennis was walking through the halls of Prentiss and saw a man with a Monsters cap. Dennis said, “Oh, you’re a Monsters fan!”

Don would not be sitting alone anymore.

Dennis now spends his volunteer time playing cards and other games with Don at Prentiss. Last year, he treated him to a Monsters game.

This year, on February 12, Dennis took Don, who now uses a walker, to another Monsters' game.

The surprise was a goodie bag from the Monsters with Joe Thomas bobbleheads and a meet and greet with the winning goalie, Jean-Francois Berube.

Berube even signed their bobbleheads.