A powerful message about painkillers

Pedestrians in downtown Cleveland July 25 got a sobering message about the dangers of prescription painkillers. A 10-foot pill bottle appeared on the sidewalk, first near the Cuyahoga County administrative building, then on Public Square.

As onlookers stopped and snapped photos, they noticed a person trapped inside. The bottle’s label told the story: “Stacey Foster: Took pain meds after dental surgery. Battling opioid addiction for 7 years. Today her three kids are in protective custody.” 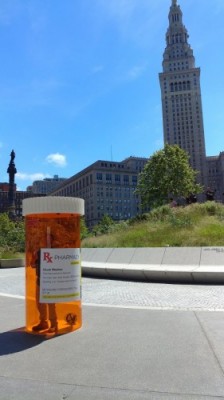 The person inside the bottle and the label changed periodically throughout the day. Other labels included: “Chuck Meehan: Prescribed opioids for back pain. Four years later, blew through a $20k inheritance, spending it on ‘the best heroin in the city.’" “Mike Ward: Took one capsule after knee surgery, got hooked on more than 15 a day, then switched to heroin because it was cheaper.”

The giant bottle was part of the “Know The Rx” campaign, a collaborative effort co-founded by MetroHealth and Cuyahoga County and supported by area hospitals, local ad agencies, productions companies, most major media outlets, professional sports teams and other community partners. The project battles the opioid epidemic by educating the community about the dangers of prescription painkillers. Four out of five heroin users began their addiction by misusing prescription painkillers, and more than 660 people died of overdoses in 2016, just in Cuyahoga County.

A powerful message about painkillers