A zoo’s worth of stuffed animals for our smallest patients 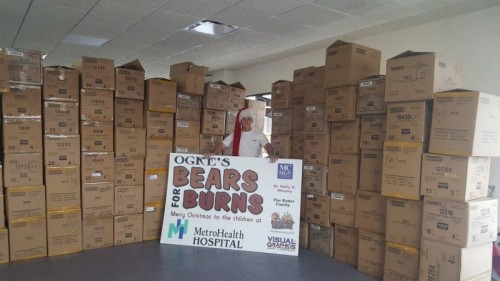 Nobody likes to spend the holidays in the hospital. That’s especially true for kids.

That’s why, for the last 26 years, Matt “Ogre” Whaley has been collecting and donating stuffed animals for children in MetroHealth’s pediatric intensive care unit and burn care center. If you meet him, it doesn’t seem like Ogre’s nickname fits. But that might be because we’re so used to seeing him with a huge smile on his face and a Santa hat on his head.

What started as an unexpected donation of around 100 teddy bears has grown into an annual tradition that needs a team of volunteers to unload a literal truckload of toys. Every year since 1991, Matt’s been leading fundraisers, hosting dinners and collecting donations, all of which he uses to purchase new stuffed animals for our youngest patients. This year, Ogre donated more than 1,800 stuffed animals, from turtles and tigers to pigs and porcupines.

Whether Matt lives up to his fierce nickname is debatable, but one thing’s for sure: Ogre and his team go a long way to making sure our pediatric patients have as happy a holiday season as possible.

To see more photos of Matt’s donations over the years, visit Ogre’s Bears for Burns on Facebook.

A zoo’s worth of stuffed animals for our smallest patients