An enduring dream and a conversation to honor it 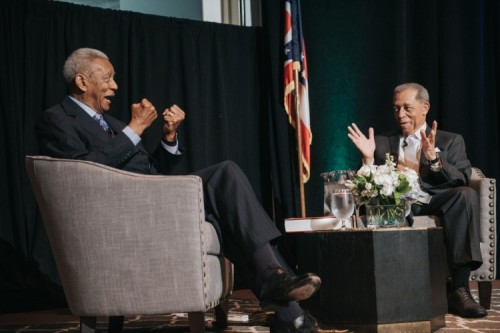 More than 50 years after the Rev. Dr. Martin Luther King Jr. spoke of economic inequity in America and launched the Poor People’s Campaign, Cleveland is still deeply divided by race and class.

These disparities inspired us to partner with Cuyahoga Community College to create a year of programs honoring Dr. King’s legacy and asking tough questions about what we can do to improve Cleveland for everyone who lives here. The first event in the series, “The Dream Endures: a conversation between Leon Bibb and the Rev. Dr. Otis Moss Jr.,” was the perfect place to start.

Bibb, a trailblazing African-American journalist, interviewed Dr. Moss, a civil rights icon in his own right, about his years of work and friendship with Dr. King. More than anything, Dr. Moss stressed the fact that despite being a massive figure, King never lost his connection to friends, family and the communities he served. “Dr. King was a great global leader, but he had such a personal touch,” said Dr. Moss.

One of the most enlightening sections of the discussion came from a seemingly random question. Bibb, using his veteran interviewer’s instincts, used a lull in the conversation to throw what seemed like a total curveball: Did Dr. King have a sense of humor? Dr. Moss’ answer started simple – of course Dr. King could laugh – but grew into a wider discussion of leadership and character. “Leaders without humor are dangerous,” Moss declared. “They must be able to laugh at themselves” or risk losing their connection to what makes us all human. Sometimes that levity needs to come at what seems like the most inopportune moments.

As evidence, Dr. Moss recalled when Dr. King was attacked by a white supremacist at a Southern Leadership Conference event. While King was speaking, the attacker rushed the stage and punched him before being subdued. When asked if he was all right, Dr. King – without missing a beat – deadpanned, “I'm fine, but that brother who hit me needs to go into the boxing profession.”

“You’ve got to have a sense of hope and a sense of humor” to face what can seem like insurmountable odds when you’re trying to change the world, said Dr. Moss. That’s a connection that’s not far removed with the situation in our city today. After acknowledging Cleveland’s ongoing struggles with race and economic inequality, Dr. Moss also pointed out that it’s a city with enormous possibilities. "How we utilize the potential and grasp the opportunities, it's up to each one of us,” he reminded the audience.

An enduring dream and a conversation to honor it