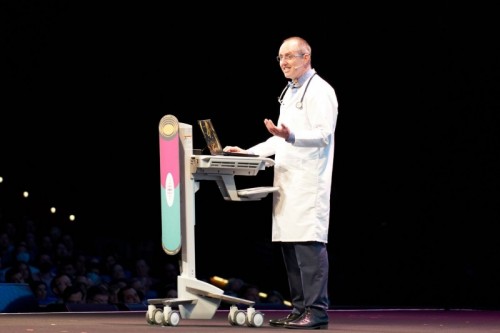 David Kaelber, MD, PhD, MPH, is one of the fiercest champions of the Epic electronic health record at The MetroHealth System and, perhaps, even the world.

So, to be invited on stage at Epic’s recent Users Group Meeting (UGM) at the company’s headquarters in Wisconsin was certainly the thrill of a lifetime.

“This was an amazing opportunity for me and MetroHealth to be the first health care system to do a live demonstration connecting two Epic systems during Epic’s annual UGM,” said Dr. Kaelber, MetroHealth’s Chief Medical Informatics Officer and Vice President of Health Informatics and Patient Engagement Technologies.  “MetroHealth was chosen to participate in this live demonstration because of our over 20-year relationship with Epic and over 10-year involvement in using the Epic electronic health record for ground-breaking research.”

Epic’s UGM is the electronic health record software provider’s major annual conference in Verona, Wisc., attended by thousands of health care and information technology professionals from around the globe.

Traditionally, only Epic executives take the stage during the main-stage presentation, which kicks off with an address from Epic’s CEO, Judy Faulkner. But with Lindemann, Dr. Kaelber demonstrated a new feature in Cosmos that will make it significantly easier for health systems like MetroHealth to connect patients with multi-site clinical trials. This will enable patients at MetroHealth and beyond to access groundbreaking medical treatments more quickly.

Traditionally, a clinical trial’s organizer, for example, would manually query individual health systems that would then have to sort through their own data to identify qualifying patients – a process that could take weeks. With Cosmos, identifying possible patients for a trial would take only seconds.

“Few people have the excitement and passion to change the world for the better like David does,” said Lindemann. “He is an excellent ambassador for how both MetroHealth and the Cosmos research community are working to improve health care.”

Dr. Kaelber has also led the team that has empowered hundreds of thousands of patients to take control of their health. To date, more than 325,000 MetroHealth patients (top 10% of all Epic public/safety-net health care systems) have signed up for MyChart, MetroHealth’s electronic personal health record. With MyChart, patients can communicate with their providers, self-schedule appointments, refill medications, view their test results and more.