Awareness about the dangers and costs of falls 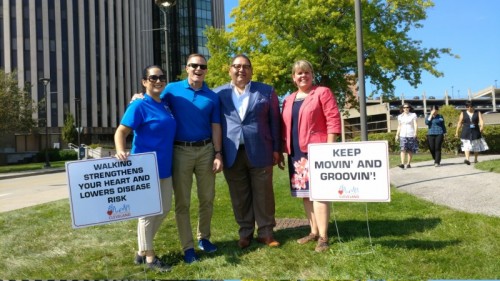 In the time it takes you to read this sentence, five older adults in America will have fallen.

Here are some grim facts:

• Every second of every day, an older adult falls in the United States, making falls the No. 1 cause of injuries and deaths among older Americans.

• In 2015, nearly 1 million older Americans were hospitalized because of an injury suffered in a fall, most often a broken hip or head injury.

• Injuries from falls lead to more than $30 billion in Medicare costs every year.

• With more than 10,000 Americans turning 65 every day, the number of fall-related injuries and deaths is expected to surge.

Older Americans falling is a major health issue that can be largely prevented through education, fitness/wellness and simple changes to older adults’ living environments. Still, the epidemic fails to get the attention it should.

We are helping to change that.

Friday, September 22, was Falls Prevention Awareness Day, and scores of MetroHealth employees participated in the STEADYU Ohio “10 Million Steps to Prevent Falls” event. Along with partners from the Cleveland Department of Aging, employees walked a mile on our campus to raise awareness of falls and the steps older people can take to strengthen and protect themselves.

For more on the 10 Million Steps program visit: https://aging.ohio.gov/steadyu/

Awareness about the dangers and costs of falls