Sally Jamieson turned 100 on January 19. She easily holds the title of MetroHealth's "most senior" volunteer, but you would never know it.

(​It’s easy to spot the birthday girl. She’s the one with the tiara holding a silver tray filled with cream puffs. They are her favorite --- a gift from Becky Moldaver, Director of Volunteer Services.) 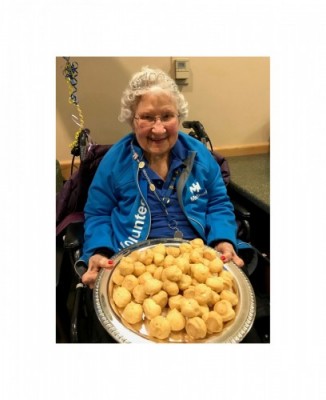 Every Tuesday, Sally mans the reception desk at the Old Brooklyn Medical Center, where she greets guests and patients from noon to 3 p.m. But for this special birthday, the patients and employees were the ones greeting her with birthday wishes, hugs and selfies.

A patient rolls by in a wheelchair and shouts, “100! I thought you were in your 80’s.” Sally just smiles and tells another story to anyone who will listen. Like the time a county commissioner walked through the door and she greeted him by name. “He was so surprised anyone recognized him,” she says. “But I did.”

She claims listening has helped her reach her epic birthday. “I’ve learned so much from listening, as you can tell from all my stories.” She has a lot of stories. Like the time she met her husband. “He was working on a car out front with my brother. He had on a nice coat and a smart looking Stetson.” Sally motions to her head as if adjusting a cap. Ten days later they married and stayed married for 47-plus years. “He was the kindest most gentle man,” she says.

In addition to Old Brooklyn, Sally has spent many hours volunteering at the Elisabeth Prentiss Center just down the street. That’s where she says her mission is to “make the old people happy.” She makes that mission look easy.

There are no awkward silences with Sally. She fills the space with jokes – remembering every punchline.

“What do you get when you cross a frog with a calendar?” Pause. “Leap year!”

(Off-color jokes aren’t off limits, but you'll have to meet Sally in person for those.)

“I love to talk to people and make them laugh. I see people coming in down and depressed and I just get them laughing,” she says.

“What is as big as an elephant, but doesn’t weigh an ounce?” Pause. “His shadow.” 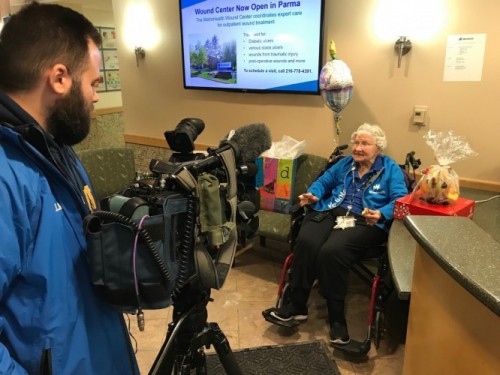 As a TV cameraman interviews her, he asks the obvious question. “So, what does it feel like to be 100?” She quips, “I feel with my hands. I don’t feel any different.”

“So many people have supported me and helped me get this far,” she says. “I feel like a queen every day.”

Sally says every birthday people ask her what she wants. She tells them she has everything she needs -- and ends up with lottery tickets.

And though she hasn’t won the big one yet, Sally’s hopeful her numbers will come in.