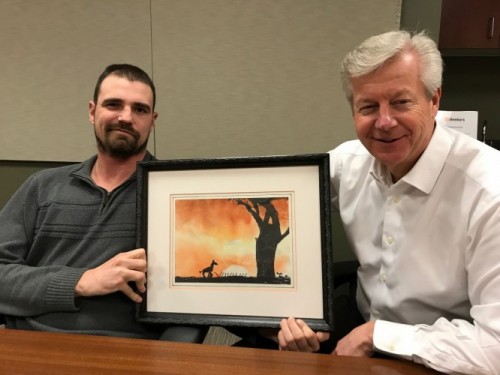 As our new seven-level parking garage rises into the sky on main campus, the company managing the construction, Donley’s Inc., has been adding something special into the concrete and steel.

Back in December 2009, Donley’s was helping build the new atrium at the Cleveland Museum of Art. One of the carpenters on site was 23-year-old Charles “Charlie” Bluhm III, the fourth generation in his family to work as a carpenter for the Cleveland-based construction company.

Two days before Christmas, crews were building an elevator shaft, and a crane was hoisting a formwork panel about 30 to 40 feet in the air. The connection between crane and panel suddenly failed, sending the 8,000-pound panel crashing to a platform below.

A portion of it landed on Charlie.

When crews lifted the panel, they saw Charlie’s mangled body: Both legs and both arms were broken in at least six places. His scalp was torn open. Cleveland EMS rushed him to MetroHealth.

“We always knew the trauma center was a jewel for the city,” says Don Dreier, Donley’s Executive Vice President. “We were able to witness that first hand.”

Among his many injuries, Charlie suffered a traumatic brain injury. Now 30, he has no memory of the more-than-15 surgeries he needed or the months he spent in intensive care. Don visited often and Donley’s provided housing close to MetroHealth for Charlie’s parents, who live more than an hour away. Don reassured Charlie about his job with Donley’s, telling him “I’ve got an empty chair waiting for you.” He also remembers waking up long enough to watch “Wheel of Fortune” and then sleeping again for another day.

As he regained cognitive acuity and thrived in inpatient therapy, he remembers receiving great care from Dr. Lixin Cui and many others.

As part of his therapy, he played in drum circles and painted. During a visit, Don fell in love with one of Charlie’s paintings, which depicted what appears to be a horse under a tree.

“That’s actually supposed to be a giraffe,” quips Charlie. “Don said, ‘That’s awesome. I want that.’ So the year after I came back to work, I surprised him and gave it to him for Christmas.”

Charlie returned to Donley’s after about two years of recovery and rehab. He now works in the engineering department at the company’s offices. He taught himself 3D computer-aided-design software and designs formwork and drafts construction drawings for the workers in the field.

And, yes, he helped with some of the design and drafting work for MetroHealth’s new garage.

Charlie says the accident has made him more social and a bit more cautious. He’s kept his positive attitude, sense of humor and work ethic.

On weekends, he works on his family’s farm in Ashtabula County, helping tend to the fields of corn and soybeans and nearly 80 head of cattle.

Although much of his memory has returned, Charlie still doesn’t remember the weeks leading up to the accident or the months afterward.

He does know for certain, however, about the level of care he received at MetroHealth.

“It was good,” he says, “because I am here today versus what could have been.”

Don remembers it all.

“I know our prayers were answered because it’s a miracle that Charles is not only here today but is able to do what he’s doing,” he says.

“I don’t think there’s any place that could have done what they did at MetroHealth.”