Help us make a difference during School Health Month 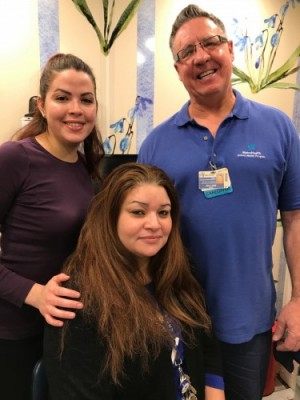 When medical assistants Carolina DeJesus and Maritza Romero came to work for MetroHealth’s School Health Program, which provides primary care services to 13 Cleveland Metropolitan School District schools, they knew what they were expected to do. They’d welcome children to the school health clinics, take their blood pressure and weigh them – the usual things medical assistants do.

Bill Sibert understood his job, too. The EMT and retired firefighter was hired to drive the School Health mobile unit and keep it running. And when the mobile unit arrived at each school, he would escort students from their classrooms to the medical office on wheels outside.

But in just a few weeks they realized their real work was something more.

As they returned to the schools, week after week, the students began opening up.

Some had no food or utilities at home. Some were being bullied. Others, for the first time, shared stories of their abuse.

And Maritza and Carolina and Bill began finding help for all of them. They connected the students with school district nurses, other MetroHealth providers, social services, mobile crisis, whichever agency was right.

In the end, Katie says, employees in the School Health Program did something else for the students.

They became their friends – adults they knew would keep their word – and their advisers.

Bill tells the story of a senior he talked to about going to college.

But he came back to see the team after he graduated from high school.

“Hey, I just want to thank you for helping me make my dream come true,” he told Bill. “I’m going to the community college.”

The kids are warming up in other ways, too.

That’s because Bill and Carolina and Maritza know when to reach into the mobile unit’s closet to pull out a pair of socks or shoes or a coat or gloves for the students who come to school without them.

They buy much of the clothing with donations that they – and the rest of the School Health team – make. A MetroHealth A.C.T.I.O.N. grant from Pastoral Care and Volunteer Services helps, too.

And now, during February – School Health Month – they’re asking if the rest of us might pitch in, too.

“We just had two kids today – 5 or 6 years old – who came in without socks,” Carolina said on a cold day in January.

Another teenager walked out of his class toward the mobile unit wearing a sweatshirt and a look on his face that said life wasn’t so good.

“I’m OK,” he said, ignoring the advice and tugging on his hoodie. “This is my coat.”

Inside the mobile unit, the team found a new winter coat in just his size and a color he loved. They gave him gloves and a scarf, too.

The tough guy stood in front of the mirror in the mobile unit, spun around and smiled as big as he could.

“I am hot,” he announced to the team.

If you’d like to help Carolina, Maritza, Bill and the rest of the team make other kids feel just as good, you can donate new socks, shoes, hats, gloves, scarves and coats by calling 216-957-1303 or dropping the items in designated bins you’ll find at main campus and our health center locations February 14 - 28.

And so will all the kids they’re helping every day.

Help us make a difference during School Health Month