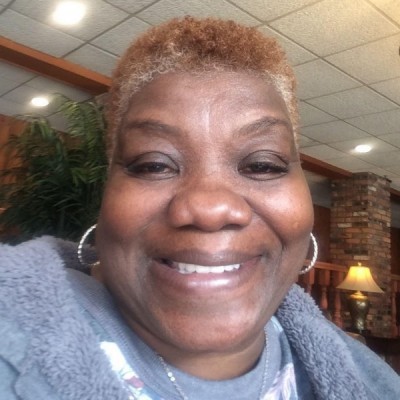 When the call came, Jackie Battle dropped the phone and burst into tears.

Her son, Ronald, picked up the phone, listened to the news, then wrapped his mother in a big hug.

But the two words Jackie heard, breast cancer, had her thinking the worst.

She was 62 years old. She’d lost her husband to heart disease two years earlier. She was battling diabetes and COPD. And all she could think about were her six grandchildren and two great-grands.

“I wanted to see them grow and get their diplomas,” she says now. “I just wanted to be here. I wanted to live.”

Not long after, she was at MetroHealth, beginning chemotherapy for a tumor the size of a 50-cent coin.

When the 12 weeks of daily infusions ended – her daughter Keyana by her side every time, her daughter Kimberly serving as her personal massage therapist afterward, and her son and daughter-in-law, Brittany, encouraging her every day – Jackie’s tumor had shrunk to the size of a mustard seed.

Then MetroHealth Surgical Oncologist Dr. Natalie Joseph stepped in and removed what was left of the tumor in a procedure that had Jackie back home the same day.

“That Dr. Joseph, I tell you what, you better keep her. She’s beautiful inside and out,” Jackie says. “She’s just the best in the world.”

After recovering from surgery, Jackie began radiation, which she completed July 27, 2021, with her daughter at her side again.

“Honey, when I rang that radiation bell for the last time, I just shouted. I just cried, Halleleujah. I was just thankful to God that he saved me.

“It’s gone, I thought. I’m free. It’s like a burden lifted off you.

“And I want to say this: the doctors at MetroHealth, the team, were excellent. Everyone I came in contact with was just a beautiful soul. They were humble and compassionate and that’s what you need when you’re going through this.”

Even better is that Jackie was able to take advantage of MetroHealth’s Prone Immobilization System for radiation, which allows patients to receive radiation while lying on their stomachs, on a specially designed table, instead of their backs.

The table exposes only the breast being radiated and better protects surrounding tissue and internal organs – especially the heart and lungs – which prevents complications down the road.

And the table allows the patient to be perfectly positioned in treatment after treatment, improving accuracy and the end result.

“It allows us to be very precise,” says MetroHealth Radiation Therapist Supervisor Diane Loska. “It decreases the side effects of radiation.

It is, she says, “hands down, the best way to treat a breast.”

“And it makes the overall experience of radiation easier on the patient,” says MetroHealth Radiation Oncologist Dr. Ashley Sekhon.

“Fortunately, we’ve been able to adopt it successfully it for the majority of our patients.”

For Jackie Battle, the treatment means she’s cancer free and ready to move out of the mother-in-law suite at her son’s house and back into her own apartment.

“I’m looking forward to just living life and enjoying my grandchildren, to just being me, just having fun and being thankful to God for this glorious thing that he brought me through.

“I’m a breast cancer survivor and I’m thankful and grateful.”

To learn more about MetroHealth's Center for Breast Health or to schedule a screening, visit metrohealth.org/breast-health.