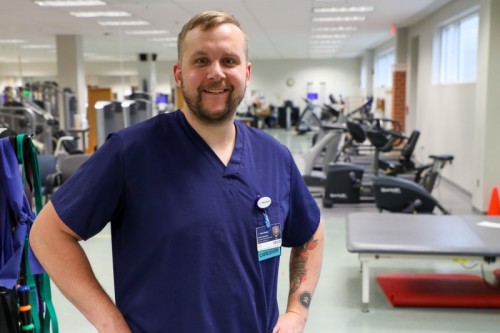 “My journey began here at MetroHealth in early 2018 when I suffered a traumatic brain injury and was left in a coma for two weeks. I awoke to a ventilator and feeding tube in my nose and mouth wondering what happened.”

In February 2018, Jeffrey Neumann suffered an anoxic brain injury – a lack of oxygen to the brain – caused by an opioid overdose.

For nearly a decade prior to that, he had struggled with drug and alcohol addiction and had been in and out of residential rehabilitation facilities. Emerging from a two-week coma, his parents by his bedside at MetroHealth, Jeff was at the beginning of his recovery.

His journey included inpatient therapy and becoming a volunteer in the Department of Physical Medicine and Rehabilitation (PM&R). Today, he’s working as a full-time employee.

At the end of September, Jeff started a new full-time position as outpatient patient rehab assistant in PM&R. Clean and sober since giving up drinking nearly two years ago, he credits MetroHealth and the people who have helped him get to where he is today. So grateful is he that he sent us an email with his story and a list of people he wanted to publicly thank.

In March 2018, Jeff started inpatient therapy at the Old Brooklyn Campus. He worked with physical, occupational and speech therapy for several weeks before spending a couple of months in a skilled nursing facility.

Jeff returned to MetroHealth for outpatient physical therapy and became involved in Work Matters, one of the MetroHealth Rehabilitation Institute’s vocational rehabilitation services. Meggan, whom Jeff calls one of his “biggest cheerleaders,” was one of the people who helped prepare him to rejoin the workforce when his physical and speech therapy sessions ended.

For about a year and a half, to ease back into a work routine, Jeff volunteered as a roving ambassador twice a week at Cleveland Metroparks Zoo, and as a volunteer in outpatient PM&R at Main Campus two mornings a week. Jeff had chosen PM&R because “I wanted to give back to the place that saved my life.”

The COVID-19 pandemic temporarily halted the volunteer jobs, but by summer 2021 he had returned to MetroHealth.

“Everyone really relied on him,” Meggan said. “He’s just a pleasure to be around. He’s one of the most sincere, nonjudgmental, happy people.”

When one of the outpatient patient rehab assistants left, Meggan and Sarah Strebel, Manager of Operations, Outpatient Rehab, thought Jeff would be perfect for the job.

“Jeff had showed progress in vocational rehab, and he was just a solid volunteer for us. The therapists love him,” Sarah says. “We had other candidates, but he aced the interview.”

Or, as Jeff put it in his email: “I crushed the interview, even though my speaking skills are still yet to be desired.”

Jeff ended his email with this:

“I believe that this testimony speaks volumes about the kind and patient staff here and the wonders that can happen. This place absolutely rules, and I will forever be grateful and indebted to everybody that helped me into the life I have today.”