It’s a recent Thursday afternoon down in the Center for Campus Transformation. Amar Baraily, in a bright blue dress shirt and striped tie, is carefully unboxing the golden shovels that will be used during the ceremonial groundbreaking for MetroHealth’s new hospital. After tearing away brown-paper wrapping, he carefully places each shining shovel on a stand as if it’s an autographed guitar. 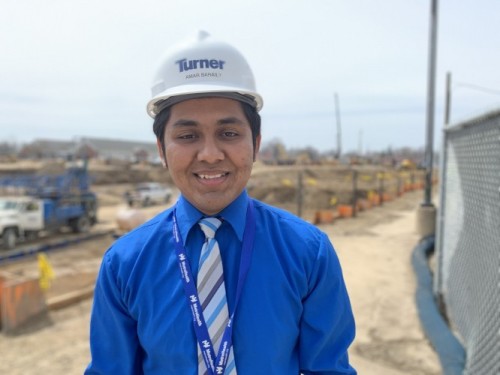 That task came after Amar had finished laminating desk name tags for everyone in the Transformation Center, which came after he created a bulletin board to capture and track the team’s creative ideas, which came after he typed an Excel spreadsheet of contact information for all the project’s workers, vendors and subcontractors.

Amar, 19, is a few weeks into his co-op with Turner Construction, MetroHealth’s construction manager and partner on the Campus Transformation, and while he’s not making coffee, delivering sandwiches or manning the copy machine, he knows that being a newbie intern means a wide range of tasks.

“I do anything they assign me,” says Amar, who works two four-hour afternoon shifts a week, Tuesdays and Thursdays.

The rest of the week he’s in class upstairs, completing the final requirements of high school. Amar is part of the first graduating class at the Lincoln-West School of Science and Health, which is believed to be the only high school in the nation located inside a hospital.

And while he needs to take only a flight of stairs to go from school to work (the co-op job with Turner is paid), Amar’s journey here has been much, much longer.

Amar is of Nepali descent. For generations, his family lived peacefully in Bhutan, a small Himalayan kingdom nestled between China and India. In the 1980s, simmering ethnic and political tensions boiled over. The government of Bhutan passed laws limiting the rights of ethnic Nepalis. It banned the teaching of the Nepali language in schools. And it enforced a strict dress code prohibiting traditional Nepali clothing.

The demonstrations and protests that followed turned violent. Ethnic Nepalis were imprisoned and tortured. They had their homes destroyed and their citizenship stripped away.

The result was a massive expulsion and exodus: Roughly 100,000 Nepali-Bhutanese refugees ended up in United Nations refugee camps in nearby Nepal.

Amar’s family arrived at a camp in Southeast Nepal in 1992. They were still there when he was born in 1999. And they remained – through Amar’s first 13 birthdays.

His memories of the time are mixed. He remembers flying kites, catching insects and playing by a nearby river, but he also remembers the lack of jobs and opportunities for the refugees.

“I went to school there, but I was not focused,” he says. “I saw people studying, higher and higher, but they didn’t get a good job. … What’s the reason for going to school if you don’t have a good job?”

“I’m so impressed with where he came from to where he is now. … For him to carry all that responsibility at home and school, and coming here for work – he’s amazing.”

The United States began accepting large numbers of Bhutanese refugees around 2008, eventually taking in more than 80,000. Almost 1,000 ended up in Cleveland.

Amar’s older sister is disabled, so the family was steered here because of our region’s strong health care. They arrived in June 2012 and moved into a house on the city’s West Side.

Amar remembers seeing snow for the first time late that fall. “I walked to the store,” he says, laughing. “I took one step and fell down.”

He started as a sixth-grader at Thomas Jefferson International Newcomers Academy, a Cleveland public school for immigrants and students learning English as a second language.

Amar’s is English is good – and improving. But it’s difficult to practice and build confidence outside of school. His family speaks Nepali at home and relies on him to make appointments, pay bills and interact with the English-speaking world. His father works at a food plant, and his mother is caregiver to his older sister. Amar helps with that, too. Two older brothers live elsewhere in Cleveland.

When high school began, Amar enrolled at Lincoln-West. In the autumn of 2016, when MetroHealth and the Cleveland Municipal School District partnered to open the Lincoln-West School of Science and Health, Amar enrolled.

By then, he’d discovered the motivation that was missing in the refugee camp.

“He excels in science and math, but what I really enjoy is watching him make progress in English,” says Andrese Howard, Amar’s English teacher at LWSH. “He strives.”

When the class sits together for Socratic discussions, each sharing and listening to others’ thoughts, Amar offers another dimension, says Ms. Howard.

“He brings a perspective to our class, with the diversity of his culture and experience,” she says. “He doesn’t talk too much, but when he does, it’s always with a purpose.”

The rest of the Class of 2019 looks up to Amar, she says, because he’s a bit older, excels at school, works and plays sports. 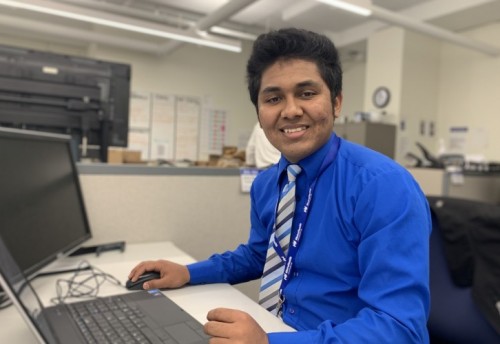 “He brings leadership, a positive attitude and a strong work ethic,” she says. “They are in awe of him.”

It also doesn’t hurt that he’s the class valedictorian.

Amar is headed to college to study computer science. He knows he needs to stay close to home, so it’s down to Cleveland State, John Carroll or Hiram College.

In January, he became a U.S. citizen.

Jonelle Cubero, an administrative assistant for Turner in the Center for Campus Transformation, loves working with Amar and has pulled him under her wing.

“He’s such a gentle, quiet guy,” she says. “He’s a brilliant young student. He can turn anything into a game with a snap of a finger.

“I’m so impressed with where he came from to where he is now. … For him to carry all that responsibility at home and school, and coming here for work – he’s amazing.”

In his free time, Amar hangs out with his friends. He’s not a fan of video games. Instead they head to the Metroparks when the weather cooperates. Otherwise they gather in the kitchen to make traditional Nepali dishes including chatpate (a medley of spices, noodles, chickpeas and rice), samosa (meat-filled pastries) and momo (fried dumplings).

Amar has also embraced varsity sports. In the fall, he played tennis for Lincoln-West. In the winter, it was bowling. In spring, it’s been golf. Despite having never played any of those sports before high school, Amar was named team MVP in each of them this past school year.

He’s been purposely avoiding the one sport he’s played his whole life, soccer, because his intense style of play often left him injured.