"From the outside, it looks like she's being obstinate, but health care occurs in the patient's world." 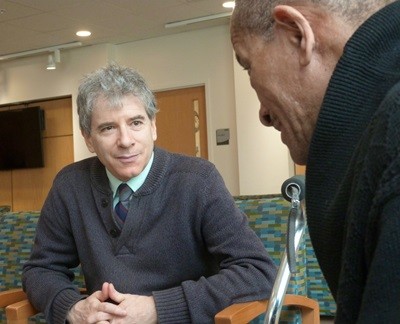 Ten years ago, Oliver Schirokauer seemed to be at the pinnacle of his professional life. He held an undergraduate degree from Yale, a doctorate from Cal-Berkeley and a coveted tenured position as a math professor at Oberlin College. In addition to research and teaching, his expertise in algebraic number theory gave him the opportunity to do some side work on the cutting edge of cryptology and communications security.

But all the while, a new theory had taken hold in Oliver's mind. Over the course of less than a decade, three members of his family had been stricken with cancer. He had seen how each diagnosis came not only with the physical challenges of illness but with overwhelming amounts of information – often confusing – from many different providers. His family struggled to understand what was happening and how to make decisions. And all of it was happening at the very moment in their lives when they were at their most vulnerable.If his own family – fortunate to have a support system, education and resources – had struggled, what about the patients who weren't so fortunate?

"It's so difficult for people to manage these situations," says Oliver, a thoughtful, soft-spoken guy who seems to measure his words twice. "The medicalization of their lives is so difficult to integrate into the lives they were leading before the diagnosis."

What if, Oliver theorized, there was someone whose job was to help patients with the communicating, the information-processing and the decision-making following a complex medical diagnosis? What if someone could partner with patients and their families to help bridge the gap of understanding with providers? What if this person could actually sit with patients in the waiting room and then accompany them in to see their doctors?

Like a complex math problem, Oliver thought about the idea for years. He bounced the concept off physicians, nurses, program directors, and a medical anthropologist. He even cold-called Don Berwick, who would soon become the head of the Center of Medicare and Medicaid Services. (Berwick returned the call.)

The conversations confirmed what Oliver suspected: Patients with complex diagnoses are overwhelmed and confused with the information and decisions they face. They need help.

Oliver decided to provide it.

In 2010, he resigned from Oberlin College (although the school gave him a year's leave in case he changed his mind).Then Oliver went to medical school. He was 47.

During four years at Case Western Reserve University's School of Medicine, Oliver found his age and experience were both a help (organizing information and balancing school and life were easier) and a hindrance ("I saw a chart on how cognitive function declines with age," he remembers, "and it was right there, in the mid-40's, that's when some of us start to lose our ability to do certain things.") Oliver finished medical school and started residency.

"At every step, I'm thinking, do I train more or do I step off the train and try to build this other thing?" he remembers.

In 2015, after a year of residency at Summa in Akron, Oliver stepped off the train and reached out to the Center for Biomedical Ethics, a collaboration between Case Western Reserve and MetroHealth. He shared his ideas about creating a program for what he was now calling "medical facilitation."

The Center hired him to fill an open position as a clinical ethicist with the understanding that he could develop his program with part of his time. Oliver wrote a proposal outlining the role of a medical facilitator and the goals of a potential program. He would accompany patients to their appointments, sit with them in the waiting room and act as a second set of ears during the encounter with the provider. Afterward, he'd discuss with them what the doctor said, making sure they and their families understood what was going on. In between visits, he'd call them to check on how they were doing.

He created a flier for patients and reached out to Dr. Michael Raddock, a family-medicine specialist at main campus. Michael loved the concept and invited Oliver to join him on his inpatient rounds, to talk to patients about this new service.

"When they're hospitalized with serious medical illnesses, they're often interacting with tons of different medical providers," says Michael. "There are often very complicated communication issues, medical issues and social issues, all intersecting at once."

"It's just a gift to have somebody sort of say, 'Hey, I'll be there. I can come to the visit if you want. I can give you a call. I can try to explain what they were suggesting.' Who wouldn't want that?"

In the year since reaching out to Michael, Oliver has worked with about a dozen patients. Some of these people lack a strong support system and many have limited medical literacy. All could use his help.

Oliver makes it clear that while he has a medical degree, he is not acting as a treating doctor, and he sets strict boundaries as a medical facilitator. "It's important to make sure those are clear," he says. "I never give medical advice or reveal test results. I will only repeat such information if I have witnessed it being conveyed already. "I draw a strong line," he adds. "Sometimes patients will ask me, but I tell them, 'That's something you need to talk to the doctor about.'

"For the concept to work, he says, providers need to trust him just as much as his patients do."Providers do an amazing job," he says. "I am trying to do something that is useful and supportive to them. "On a recent morning, Oliver sat in the waiting room at the Cancer Care Pavilion with Ken, a patient he's been helping for about a year. They'd just seen the doctor, and Oliver was explaining what she had said, some changes to his medication and what Ken might expect at his treatment appointment later that day. "He's a big help. I have a million appointments," Ken says, laughing. "There is a lot of stuff I don't know. He explains it to me. He calls me, asks how I'm feeling, if the medicine is working. If I say no, he says, 'I think you need to make another appointment and get that worked out.' "Ken says having Oliver around has reduced his stress. He appreciates the telephone calls, the company in the waiting room and how Oliver mixes in conversations about the Cavs and Indians.

"I look at him as a friend and a helper," Ken says. "I'm blessed to have him. I've come a long way. That's why I continue to do what they tell me I have to do. I know if it's all right with him, it's got to be helping me.

"Oliver originally thought the role of medical facilitator would be to translate information from the provider to the patient. He's learned it's a two-way street. He remembers chatting with a patient in the waiting room and learning that she was getting headaches so severe, they were waking her up at night. When they went in to see the doctor, the patient mentioned only that she was getting headaches. Oliver, who for the most part remains quiet during appointments, spoke up.

"I said to the patient, 'I think it might be a good idea to say a little more about how severe your headaches are,'" Oliver remembers. "The doctor then explored the issue with her in more depth. That conversation led to a clinical decision and a brain scan."

Another time, he was with a patient who repeatedly and stubbornly refused to schedule a biopsy, no matter how much her doctor pleaded with her. When the doctor left the room, she confided to Oliver that she didn't want to schedule anything before the anniversary of her son's death. "From the outside, it looks like she's being obstinate, but health care occurs in the patient's world," Oliver says.

Bridging the world of the patient to the world of the provider and creating points of intersection and understanding are the ultimate goals of the facilitator, he says. Monica Gerrek, co-director of the Center for Biomedical Ethics, says that "right-hand person" might be a more accurate title than "facilitator" for what Oliver does for patients.

"He goes with patients into their appointments. He meets them in the waiting room. That gives him a special status with them," Monica says. "There is a space between patients and their doctor. Oliver fills that space."

Ultimately, Oliver would love to launch a medical facilitation program at MetroHealth that would include a curriculum for students (medical, nursing, etc.) to do this kind of work as part of their education. He also sees an important research opportunity.

But there's also a small detail: how to pay for it.

Patients are not billed for Oliver's time or services. He believes financial support will likely have to come from grants or philanthropic funding. Still, as Oliver helps more patients at MetroHealth, he grows only more certain that medical facilitation is improving how some of our most in-need patients understand and manage their illness. He just needs to figure out a way to expand the service – and access to it.

Like a seasoned math professor, he's not going to rest until the problem is solved.