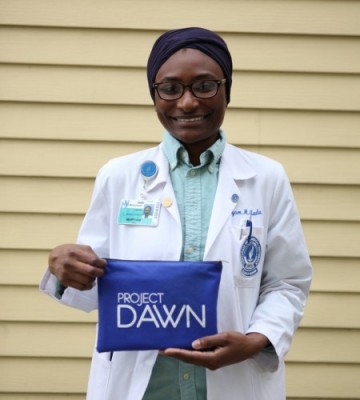 Call it being lucky; call it an accident. Or, as Maryam Audu refers to what led her to save an overdosing woman's life with naloxone last week: Divine intervention.

Whatever led her to be at the front steps of MetroHealth's main campus hospital at the exact right time last Friday, one thing's for sure. Maryam is now a perfect example of why naloxone kits are such an important resource to combat the opioid epidemic.

Maryam knew how to recognize and reverse the woman's overdose after a training session with Project DAWN - an opioid overdose education and naloxone distribution program started at MetroHealth in 2013.

Audu, a third year medical student who recently began rotations in family medicine, never thought she would use the Project DAWN kit she took with her after that morning's session. In fact, she assumed the medicine would expire before she ever had a reason to put it to use. “I was learning all the stuff, so I thought I should just take a kit,” she said. Instead, she ended up using the naloxone less than half an hour after receiving it.

On her way back into the hospital after parking her car, Audu saw a woman collapsed near the main entrance. “I looked at her and saw she wasn’t breathing. I thought she might be having a heart attack, then the man who brought her said, ‘I don’t know what she took.’" With her Project DAWN training fresh in her mind, Maryam recognized what was really wrong: The woman was overdosing.

While a nurse ran for help, Maryam administered the life-saving naloxone. Within minutes, the woman was responsive. "I would have been totally useless without that kit," says Maryam. "It was like divine intervention."

Miracle or not, this story is a reminder of a few key facts about the opioid epidemic. First, the crisis is affecting people at record numbers here in Cuyahoga County, and across the country. Second, naloxone saves lives. And, most importantly, anyone can use it to reverse an overdose. Naloxone kits, and the training on how to use them, are available through Project DAWN to anyone who is interested.