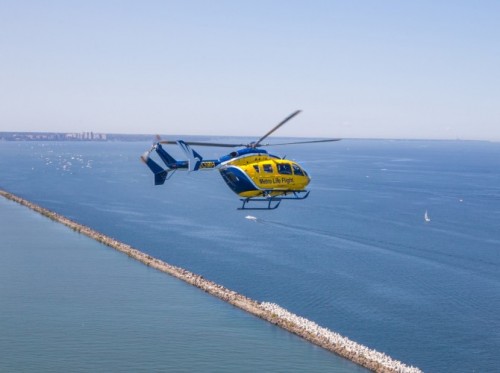 The award recognizes Metro Life Flight’s service to the Northern Ohio Violent Fugitive Task Force, made up of agents and police officers from around the region. Metro Life Flight physicians, nurse practitioners, nurses and other team members provide first-aid training to the Task Force, and sometimes accompany them as they arrest violent fugitives in case medical support is needed for anyone involved.

“Metro Life Flight works closely with police officers, firefighters and other first responders as we are called to help people often going through the worst day of their life,” said Dr. Bernard Boulanger, MD, Executive Vice President, Chief Clinical Officer of The MetroHealth System. “We respect the work the Marshals do to keep our community safe and appreciate being recognized for the hard work that has gone into building this partnership with them.”

Metro Life Flight is a not-for-profit, CAMTS-accredited, air and ground critical care transport service. Since its inception in 1982, its priorities have always been to provide the highest level of care to those in need while implementing the highest safety standards in the industry.

With helicopters, critical care ground ambulances and advanced life support ambulances based throughout the region, Metro Life Flight is readily accessible to the communities throughout Northern Ohio.

In addition to its work with the Fugitive Task Force and the Marshals, Metro Life Flight provides advanced medical and life support training to the FBI Cleveland Field Office, multiple local police departments and other first responders.

The award was presented by U.S. Marshal Peter Elliott to the Metro Life Flight team Thursday at Progressive Field. The awards presentation, delayed because of COVID-19, were for 2019 and 2020.