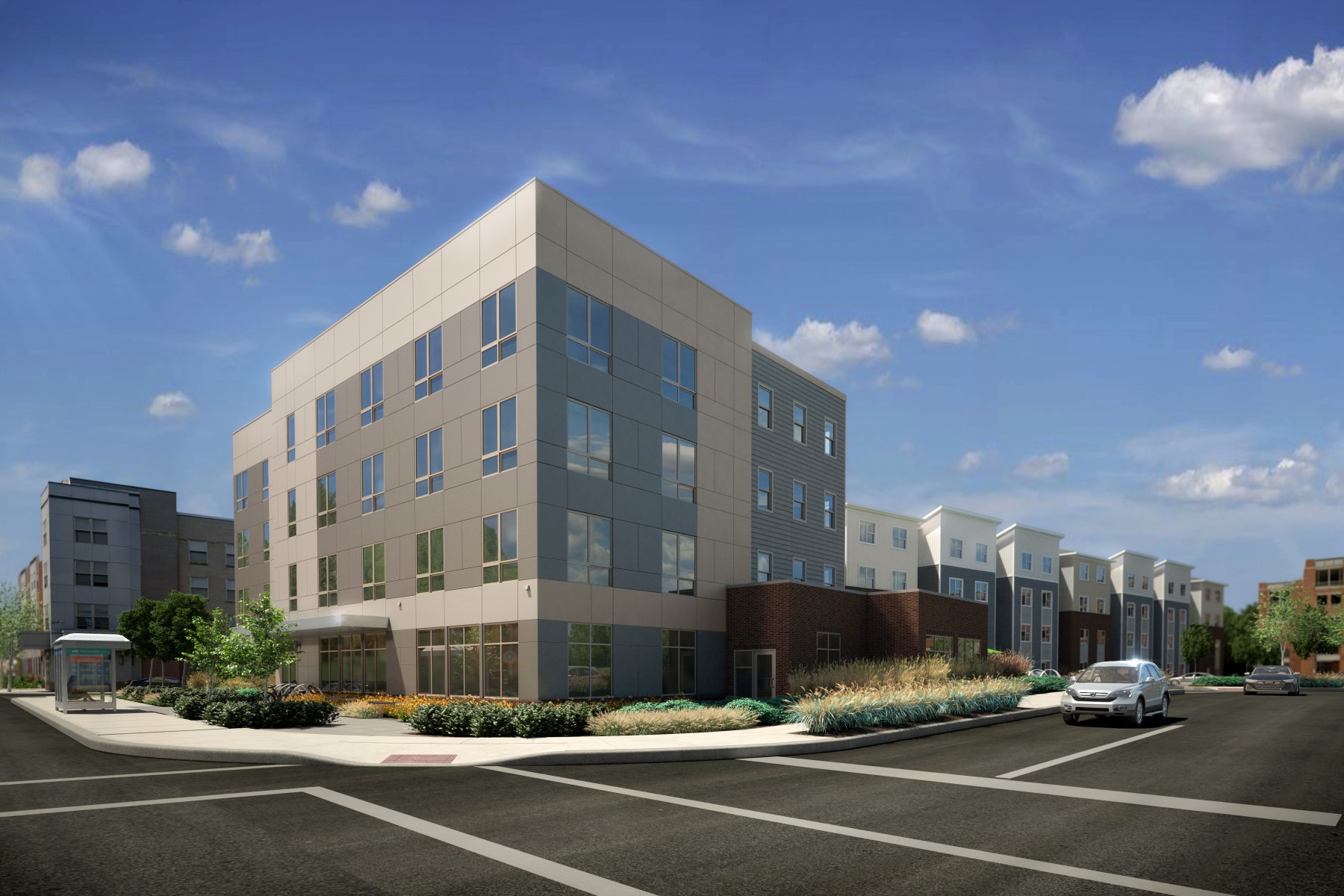 Construction is beginning on the first of three buildings that will comprise a $60-million mixed-use project in Cleveland’s Clark-Fulton neighborhood. The building is being developed by The NRP Group, The MetroHealth System and CCH Development Corp – an innovative public-private partnership that will strengthen and revitalize the west side neighborhood by filling a need for high-quality housing.

Known as Vía Sana, meaning “healthy way,” the four-story building – located at the corner of West 25th Street and Sackett Avenue – will feature 72 one-, two- and three-bedroom affordable rental residences.

Dr. Akram Boutros, MD, FACHE, President and CEO of The MetroHealth System, said the name aligns with MetroHealth’s vision and plans to have a positive impact on both the physical and economic health of the people who live in the Clark-Fulton community adjacent to its Main Campus and beyond.

“Living a healthy life is so much more than just having medical care,” Dr. Boutros said. “Factors like having access to good, safe, affordable homes, access to healthy food and access to economic opportunity can have more of an impact than doctors and hospitals. Via Sana represents our commitment to building a healthier neighborhood and providing better opportunities for its people.”

When complete, the transformative mixed-use development will include more than 250 affordable and market-rate apartments, 36,000 square feet of retail space, and the 5,000-square-foot MetroHealth Economic Opportunity Center – all part of a holistic, sustainable neighborhood designed to support an equitable, diverse and inclusive mixed-income population.

Operated in partnership with Cuyahoga Community College, the Center on the first floor of Vía Sana will offer job training, financial and digital literacy training and access to Tri-C classes.

“We could not be more pleased to be partnering with MetroHealth to provide safe, high-quality housing to the Clark-Fulton neighborhood, as well as services that build pathways of opportunity for the community,” said J. David Heller, co-founder and CEO at The NRP Group.  “Dr. Boutros is a true trailblazer and national leader in thinking outside the hospital walls to bring health and opportunity to the entire community.”

MetroHealth’s nonprofit affiliate, CCH Development, is partnering on the project with developer The NRP Group. No taxpayer funds that go to MetroHealth are being used in the project.

The residences at Vía Sana, will be available to individuals and families earning between 30 to 80 percent of the area’s median income.

The Clark-Fulton community is part of Mayor Frank Jackson’s Neighborhood Transformation Initiative and was selected as the recipient of federal funds earmarked for affordable housing through a special program created to honor the 50th anniversary of the Fair Housing Act (FHAct50). As a result, the affordable housing component of the project received tax credits as part of the state’s FHAct50 program, which supports the city’s efforts to create a more diverse and accessible community.

Funding for the project, which was designed by RDL Architects, was provided by KeyBank, the State of Ohio and Cleveland’s Housing Trust Fund.

“MetroHealth and The NRP Group share my vision of wanting to help the Clark-Fulton community grow by improving the lives of the current community members, and bringing in new residents and businesses,’’ said Ward 14 Councilwoman Jasmin Santana. “I want to thank everyone involved in this project for spearheading this development, and bringing much-needed affordable housing options and new community amenities to the neighborhood.”

The retail portion of the overall development including and beyond this first building will feature conveniences such as a grocery store and amenities including restaurants, childcare and other community spaces. MetroHealth plans to give priority to local neighborhood businesses when filling the commercial space and will relocate the headquarters of its MetroHealth Police Department to the property.

Vía Sana is expected to be completed in early 2022