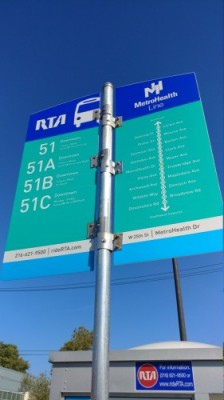 A defining aspect of MetroHealth's population health strategy is the idea that there is more to good health than what happens during visits to the hospital. It's with that principle in mind the System and the Greater Cleveland RTA celebrated the unveiling of the newly named MetroHealth Line.

The 51 A, B and C bus routes will become the MetroHealth Line beginning this fall. In addition to connecting southern suburbs like Broadview Heights, Parma Heights and Strongsville to downtown Cleveland, The MetroHealth Line is one of the RTA's busiest, serving more than 2 million people every year.

In addition to a rebranded name, and 20 new, MetroHealth branded vehicles, the MetroHealth Line will feature more than 400 new bus stop signs and 37 branded bus shelters along its path.

But this partnership is about more than a new coat of paint or adding the familiar MetroHealth logo to RTA vehicles and stops. "The first step to good health is being able to access good health care," said RTA CEO and general manager Joe Calabrese, who noted that upwards of 10% of RTA ridership is travelling to and from health care facilities.The MetroHealth Line will pass not only the System's main campus on West 25th Street, but five other MetroHealth locations across Cuyahoga County.

MetroHealth president and CEO Dr. Akram Boutros asserted that teaming up with the RTA was a move that makes sense for the System and its neighborhood alike. "This isn't about today, it's about the future; what's coming tomorrow," he said. In addition to creating a cleaner, safer, more connected neighborhood, Boutros added that collaborations like this were very much a part of MetroHealth's overall transformation strategy. "Moving up, does not mean moving out," he claimed emphatically. "We will not leave ANYONE out as we launch our transformation. We have a shared vision with RTA about creating a better West 25th Street and a more livable Cleveland.”

Look for the MetroHealth Line's new vehicles, shelters and stops starting in December.

To learn more about the celebration, read the RTA's recap here.