MetroHealth Employee Gets His Wings and Supports the System's Future, All at Once

Charles Wade's life has been full of thrilling experiences, but he’s never ridden in a helicopter. Thanks to his winning auction bid at The MetroHealth System’s GALA2016, that changed last week. On Thursday, his 60th birthday, Wade took to the skies over Cleveland with Metro Life Flight. 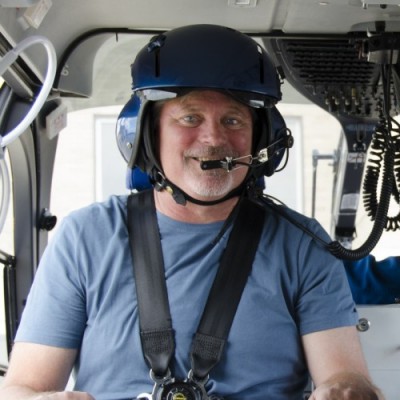 Wade, who’s been an electrician at MetroHealth for more than four years, wasn’t planning on winning anything when he submitted his bid online in May of 2016. Instead, he was just excited to help support the System’s transformation in any way could. But after his entry ended up being the winner, Wade knew when he wanted to claim his prize: on his birthday.

Before his tour and ride, the closest Wade had been to a chopper was repairing lights on Metro Life Flight’s main campus helipad. “I’ve done parachuting, hot air balloons and different kinds of air transportation, but I’ve never been in a helicopter. This was my opportunity,” he said.

The celebration was the best kind of win-win for Wade. He and his girlfriend, Lynn, got to celebrate his birthday in style, and they did so knowing their donation was directly funding MetroHealth’s future.

MetroHealth Employee Gets His Wings and Supports the System's Future, All at Once