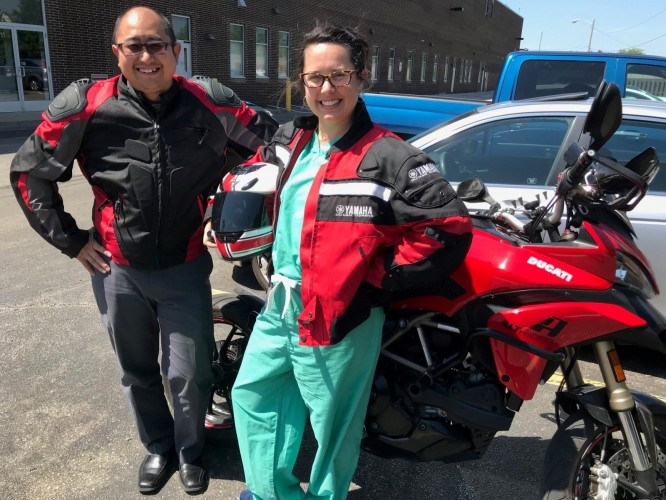 What started as a motorcycle ride to relax after work ended with two MetroHealth Family Medicine Residents saving a stranger’s life.

After a busy day serving patients at our Broadway Health Center, Dr. Hongfei Di and Dr. Elizabeth Looney headed out for a motorcycle ride through Lakewood. It was a perfect spring evening, and Hongfei had a new helmet camera he was excited to try out.

His new GoPro caught a lot more action than passing traffic. While stopped at a red light, the doctors watched a car carom through the intersection and crash into an embankment.

“We pulled over and got out,” said Hongfei. “We saw this lady slouched over her steering wheel and knew immediately, ‘Oh, this is not good.’ Her lips were turning blue. I was shaking her, and she was totally unresponsive.”

“I’ve had a couple times when I’ve seen car accidents and stopped. But I’ve never seen anything like this,” he explained.

The pair alternated rounds of CPR trying to get the woman’s heart beating again. Eventually, they felt a faint pulse, but it didn’t last long. They continued CPR until EMS arrived. “It seemed like an hour had elapsed, but it was only five minutes,” said Hongfei. In those agonizingly long 300 seconds, he had a hunch what had happened to the woman: She had overdosed on opioids. As soon as paramedics arrived, they administered naloxone, the overdose rescue drug, and she was revived.

Even though this story sounds like a one-in-a-million, it’s increasingly common for bystanders to be in the right place at the right time to save lives. In fact, the U.S. Surgeon General recently encouraged everyone to carry naloxone kits for instances like this. This is at least the second time in the last year that a MetroHealth staff member saved a life after an overdose.

If you or someone you know needs help, please contact the ADAMHS Board of Cuyahoga County.

To learn more about naloxone, including to get trained on its use, click here.

MetroHealth Receives $1 Million from Tech Entrepreneur To Assist with COVID-19 Preparedness
A Simple Solution: MetroHealth Pharmacy Makes Hand Sanitizer
COVID-19 Has the Community Taking Care of MetroHealth
MetroHealth's Helping Hand Fund Meets Needs of Individuals Impacted by COVID-19
Caring For Your Elders During the COVID-19 Crisis is Good For You, Too
MetroHealth Launches Podcast Dedicated to COVID-19 Crisis