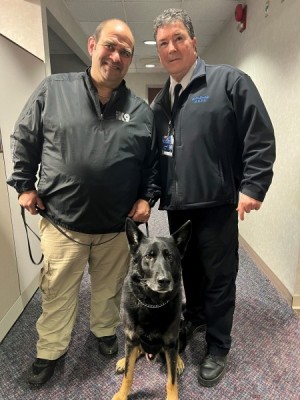 The MetroHealth Police Department is the recipient of a SRT K9 Unit - Police K-9 Grant that will allow them to add a Police K9 Officer to the team.

“As MetroHealth grows, it will be good to have another tool for safety and security,” says MetroHealth Police Department Chief Frank Bova.

In addition to the dog, the grant covers a six-week training course at Excel K-9 Services and a tactical K9 vest, along with supplies.

MetroHealth applied for the grant and was interviewed as part of the application process. MetroHealth Police Officer Anthony Konieczka has been selected to be the K9 handler; the dog is expected to start patrolling with him this summer, says Chief Bova. The K9 team will patrol primarily at main campus, but will also visit other health center locations.

The grant was made possible by funds raised during The Danny Ripepi Memorial Concert, a charity event that took place last September at Jacobs Pavilion at Nautica on the West Bank of the Flats.

Danny Ripepi was killed in a tragic accident in 2020. The memorial concert is an opportunity to give back to the community he loved so much.