Every third Tuesday of the month since June, the Outpatient Plaza transforms into a makeshift food distribution center. It’s where Ildefonso Guzman, Jr., Angela Harris and Betty Jo Palmer patiently wait with dozens of others to fill their carts with free produce supplied by the Greater Cleveland Food Bank.

Distributing free food is one way that MetroHealth is working to bring nutritious food to our patients and the community to reduce food insecurity and also to promote healthy eating. 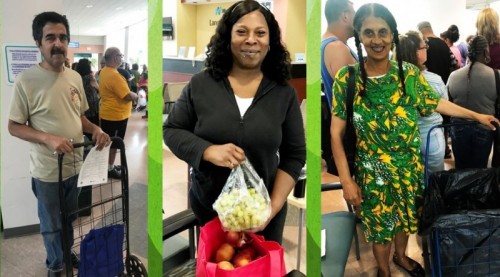 For Angela, the food came just in time. Just a week before, she had been notified that her social security payment would be cut by $250 a month. She tears up thinking about the loss of funds she depends on. Unable to maintain regular work due to recurring health issues, Angela now will be forced to live on $466 a month.

“I take my diabetes so seriously,” she says. “These fruits and vegetables mean so much. I am so grateful.”

Angela recalls watching others line up for free food at various food pantries in her neighborhood. She reluctantly admits, “Now, I’m one of them. Any little bit will help. I’m proud of MetroHealth and what they are doing.”

This is the second month Ildelfonso, who goes by Fonz, is benefitting from the free produce. As he approaches his 60th birthday he says, “everything is falling apart.” He is referring to his health, most notably the Bell’s palsy that has frozen the right side of his face into a perennial frown. He understands the correlation between good health and nutrition and works hard to eat healthy on a budget. “Now that I’m not working, this is helping me get by,” he says.

With braided hair and a bright green floral print dress, Betty Jo Palmer is a youthful 68 years old. Originally from Washington D.C., one of her earliest memories was the assassination of John F. Kennedy. “I was living in Washington when the President got shot,” she says. At 13, her family settled in Cleveland. She spent 40 years working in a paper box company on the lower west side. Now retired, Betty Jo says, “I only get so much; the food is helping a lot.”

Betty Jo first learned about the produce giveaway when she was on main campus for an appointment in June. She lists all the healthy foods she came home with that day including zucchini, squash, cauliflower, bell peppers, onions, potatoes, watermelon and melon dew. She is ready to fill her shopping cart once again and is appreciative of the opportunity. “This is really nice,” she says.

According to the USDA, one in five residents of Cuyahoga County is food insecure. Single moms and their children are most at risk with one in three unable to access nutritious food to support a healthy, active life. The growing elder population is facing similar grim statistics with an undeniable link between food insecurity and higher rates of chronic diseases, such as diabetes and high blood pressure.

The next produce distribution is set for August 20 from 10 a.m. - noon. in the hospital's Outpatient Plaza.