Minority Health Month: Winning the fight against addiction, one person at a time 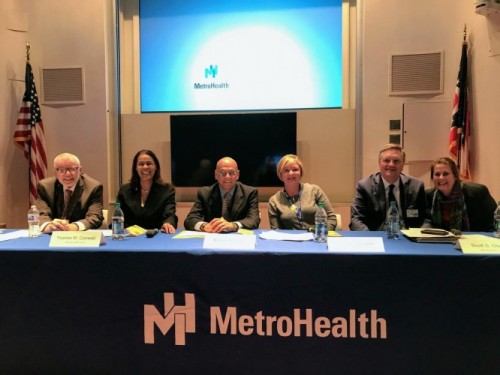 Dr. Elaine Richardson took the microphone and immediately engaged the audience with the spoken word and song narrative of her life on the streets and her road to a PhD. One sentiment resonated most clearly, "There's a whole lot of people out here that nobody can see anything in. But there's something in them."

Dr. Richardson, the keynote speaker, and a panel of community leaders were presenters at the MetroHealth Minority Health Month forum.

The forum addressed substance abuse and the opioid epidemic’s impacts on Cleveland’s minority communities. Led by retired ADAMHS Board CEO William Denihan, panelists from across Cuyahoga County explained how they see addiction affect the community. Cuyahoga County District 7 Councilwoman Yvonne Conwell talked about how addiction disproportionally affects her minority constituents. Hispanic UMADAOP’s Nelson Ramirez highlighted the record-setting and increasing number of Latina girls who self-identify as having low self esteem, a major risk factor for future struggles with addiction.

The panel did more than list disheartening statistics, however. In fact, most of the discussion focused on what people and organizations are doing to change the future, in spite of the present. Maureen Dee from the Catholic Charities Diocese of Cleveland called for a reduction in stigma around addiction. “Addiction is a brain disorder,” she said, adding that, no matter how bleak it seems, “Treatment works. People recover.”

Recovery is a major focus of MetroHealth’s efforts in the community as well. Karolyn Tibayan from our Office of Opioid Safety discussed some of the programs we’re currently leading. In addition to safe prescribing workshops for providers, we’re also launching opioid Quick Response Teams to work directly with overdose survivors and their families. Tibayan said a three-pronged approach of education, advocacy and recovery is the best way forward. The message to the community, she argued, should be about hope.

Current ADAMHS Board CEO Scott Osiecki agreed. He pointed to a partnership between the ADAMHS Board, the Office of Opioid Safety and Ascent that connects people with resources right in the emergency department after an overdose.

Even though current statistics and projections can dampen even the most optimistic spirit, the discussions at the forum should be a reminder that progress is being made. As Dr. Richardson urged the audience to remember, we should think of each person who recovers, survives and grows as a victory in the fight against addiction.

Minority Health Month: Winning the fight against addiction, one person at a time