A national organization that has established a new standard for neighborhood resilience has honored The MetroHealth System, the City of Cleveland, Metro West Community Development Organization and the Cleveland Foundation for efforts to build the Clark-Fulton neighborhood in an equitable and sustainable manner. 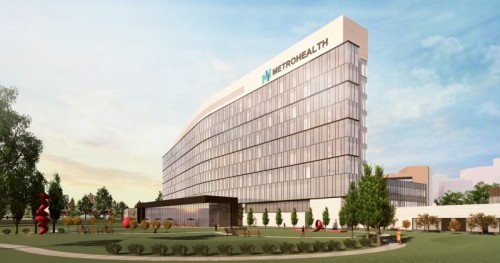 The Clark-Fulton/MetroHealth EcoDistrict received a CityMaker Award from EcoDistricts, Inc.

The award comes as community partners launch a forward-thinking Master Plan in support of Mayor Frank Jackson’s Neighborhood Transformation Initiative and on the heels of MetroHealth’s $1 billion Campus Transformation Plan. MetroHealth Transformation Plan includes building a new hospital along the West 25th Street corridor opening 25 acres of new green space. A new 12-acre public park for the benefit and health of the neighborhood within the new green space will be a key focal point and new community asset.

EcoDistricts is a Portland-based national non-profit dedicated to a new model of urban regeneration and community development rooted in social, economic and ecological innovation. The Clark-Fulton/MetroHealth EcoDistrict will be the first EcoDistrict in the world to be anchored by a health system.

“Over the past several years, MetroHealth and their partners have embarked on an important an intentional community-building process, spurred by a $1 billion redevelopment of the MetroHealth campus,” according to the award. “With local leadership, a long-term partnership was formed among key institutional and neighborhood stakeholders to ensure the EcoDistrict systemically addressed the needs, challenges and opportunities of the Clark Fulton neighborhood.”

MetroHealth President and CEO Akram Boutros, MD, FACHE, said: “We have said from the beginning of this process that we’re not just trying to build a hospital, we’re trying to build a good life for everyone who lives here. We’re gratified others recognize our efforts to transform the community and to do it in a sustainable way that will help make our community healthier.”

EcoDistrict CEO Rob Bennett presented the awards at the EcoDistrict Summit in Pittsburgh earlier this month. MetroHealth/Clark-Fulton was one of only five EcoDistrict neighborhoods honored at the event

“I'm thrilled to announce that the Clark-Fulton / MetroHealth EcoDistrict is part of our inaugural crop of Citymakers Awards winners,” Bennett said. MetroHealth has been committed to the Clark-Fulton community from the beginning and the dedication and authenticity in your work shines through, showcasing how large scale institutional and public sector driven sustainability can and should happen.”

Public, private, civic and community partners have been brought together across sectors to launch, nurture and accelerate real estate, transportation, and infrastructure projects. Projects already in the works include the MetroHealth Line bus-rapid-transit system, a free neighborhood wi-fi network, the La Villa Hispana Streetscape, an extension of the Towpath Trail, and the addition of affordable and market-rate housing that includes relocating MetroHealth’s police headquarters out into the neighborhood.

Ricardo Leon, Executive Director of the MetroWest Community Development Organization, said: “Through our partnership with The MetroHealth System, we are working to improve the quality of life for all Clark-Fulton residents, while uplifting the existing culture and inviting new investment. Together we will create a healthier, more diverse, equitable and inclusive community.”

Keisha González, program officer at the Cleveland Foundation, added: “This recognition is a testament to the power of collaboration and the democratization of neighborhood development – and we believe this is the moment the Clark-Fulton neighborhood has been waiting for,” she said “While this is just the beginning of the effort, we appreciate the efforts by all partners to put the power in the hands of residents and empower them to create their own narrative and determine how place will manifest.”

Councilwoman Jasmin Santana said the EcoDistrict Protocol followed higher standards for community development and planning and would be the guiding tenet behind the neighborhood’s upcoming master planning effort.

“This will be a highly-coordinated and inclusive effort to chart a new direction for the Clark-Fulton neighborhood,” she said. “EcoDistricts represent a thorough new process to create healthy, vibrant sustainable communities that greatly improve the lives of current residents, attract new residents and businesses and support sustainable development.”