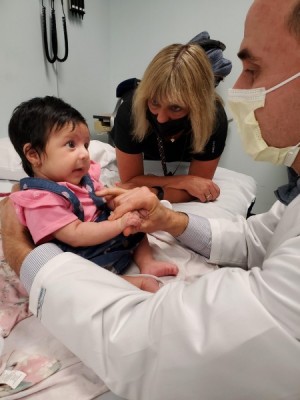 Layla Zaghari was born on July 10, 2021 at MetroHealth weighing 7 pounds 15 ounces and with a full head of jet black hair.

Before she and her mother, Maysaa Zaghari, went home, Layla had a small amount of blood drawn for newborn screening tests to detect serious hereditary health conditions not detected at birth.

Less than a week later, Maysaa received a call from geneticist Rocio Moran, MD. The results of the blood sample revealed that Layla had tested positive for the gene that causes Spinal Muscular Atrophy (SMA). It's a rare progressive hereditary condition that affects the motor neurons, controlling muscle movement. The condition leads to muscle weakness and respiratory failure.

Layla is the first baby born at MetroHealth to test positive for SMA since Ohio added the condition as part of its newborn screening panel in 2020. She has the gene that causes the most common form of SMA, Type 1, that often leads to death before age 2.

Because she hadn't yet shown any symptoms of the condition, Layla was the perfect candidate for the one-time infusion of Zolgensma, a gene therapy that has been in development for the past two decades. The Food and Drug Administration approved Zolgensma in May 2019 for infants under 2 years of age diagnosed with SMA.

After a series of phone calls with MetroHealth's specialty pharmacy and Ohio Medicaid, pediatric neurologist Andre Prochoroff, MD, received word that the novel therapy was approved for Layla. Prior to Zolgensma's approval, MetroHealth was among the locations granted approval to administer it.

Ohio Medicaid covered the cost of the drug, which currently holds the status of being the most expensive drug on the market, at $2.1 million per dose. Around 1,200 doses have been administered globally.

Clinical trials showed babies surviving past 2 years of age and doing "quite remarkable," said Dr. Prochoroff, adding that the trials have shown that patients benefit for five to 10 years after the infusion. After that, additional treatment regimens are being explored.

"Other medications have shown something similar, but this one – in my view – was quite dramatic," he said. "This type of gene therapy would be considered a 'game changer' in dealing with SMA, which essentially has had no other treatments in the past.

"With new forms of therapy on the market for progressive conditions like SMA, there is a new urgency and hope to diagnose and treat our patients earlier for a better outcome."

On August 17, Layla was back at MetroHealth for the one-time intravenous infusion, which took about an hour. As part of the protocolled therapy schedule, patients receive daily oral steroids for 30 days after the infusion. Layla returned to the clinic for regular scheduled monitoring (blood tests), in addition to her well child visits.

The diagnosis has been a lot to process for Maysaa Zaghari, who said it was all she could do to hold back her tears when she received the news. But it hasn't stopped her from getting joy out of watching Layla grow.

Layla is making more communication noises and is constantly reaching for items. She has been raising her head up and following objects, all normal development milestones.

"She's a social butterfly, she smiles a lot," said Maysaa, recounting how active Layla was during an appointment in September. "She wants to sit but she can't pull herself halfway up yet. She's playing a lot more."

On October 6, Layla was back at MetroHealth for a 30-minute physical therapy session followed by several doctors' appointments. She weighed in at 12 pounds, 4 ounces.

Rather than showing signs of "floppy baby" that is more typically expected with infants with this type of SMA (abnormal muscle tone involving the neck and limbs), Layla was moving her limbs, reaching with her arms, and moving her hips. Dr. Prochoroff was encouraged by Layla's progress, remarking on her improved head and trunk control.

"She's doing what we expect babies to do at 3 months," he told Maysaa.

Maysaa, who earned an associate degree in medical assisting and phlebotomy from Cuyahoga Community College in 2020, had planned on applying for jobs after Layla was born. Instead, she has put those plans aside for now to focus on her daughter's care.

Maysaa is exploring whether Layla will be able to enroll in a clinical trial in Chicago that is assessing the efficacy of another drug to treat patients with Type I SMA. Layla will be a candidate once three months have passed since the infusion and once the steroid is completely cleared from her system.

Before the availability of newborn screening for SMA, physicians wouldn't test for it unless there was a known family history, or if a baby demonstrated signs of muscle weakness, breathing and feeding difficulties, or other serious issues. Babies who exhibit tell-tale symptoms – including not being able to crawl, sit up and control head movements – would be screened for it by their pediatrician. Even so, not much could be done.

"That's a change in how we're practicing medicine," Dr. Prochoroff said. "And that's a good thing."

There are currently three therapies for SMA that are FDA approved. Zolgensma appears to be effective, he said.

"In the past, in child neurology, we didn't have a lot of big therapies per se," Dr. Prochoroff said. "Although now these therapies aren't definitive cures yet, they are surely making an important clinical impact on how patients will do over time. Patients live longer and have better quality of life."

MetroHealth's Pediatric Neuromuscular Care Center is part of the Muscular Dystrophy Association (MDA) clinical network, which has been in existence for decades. More than a dozen patients with SMA, from infancy to adulthood, visit the clinic regularly.

"Five years ago, an infant like Layla diagnosed with SMA type 1 would likely not have survived past two years of age," Dr. Prochoroff said. "Those with other types of SMA, however, could fare much better. They would live longer but still would be severely weak. They would be limited to only sitting up or, even less commonly, still walking, typically requiring the use of a power chair."

Those with less aggressive types of SMA who survive into adulthood can often live into their 60s, but still with significant weakness, he said.

While there have been many advances in screening and therapies, "We still don't know all the nuances about this SMA," he said. Zolgensma has the potential to change that.

The extent of Layla's muscle strength over the next few months, and if she begins to reach more milestones like sitting up and grabbing onto items, will reveal the drug's impact, he said. "So far, she's been faring very, very well. I'm very optimistic."