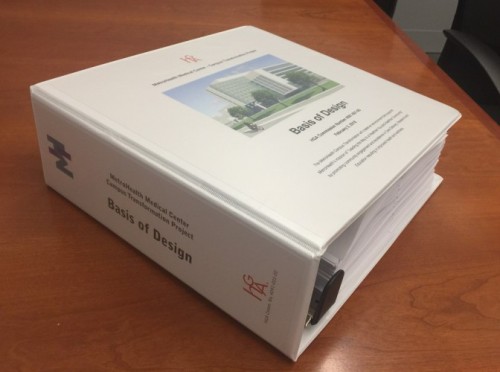 So, what’s the new hospital going to look like?

Our designers and architects are working to answer that question right now down in the Big Room inside the Center for Campus Transformation.

They are well into the schematic design process. This is when the building’s concepts and exterior appearance are decided, and initial drawings and renderings are created, says Walter Jones, Senior Vice President, Campus Transformation.

The team is using a 4-inch-thick binder to guide them. It’s called the “Basis of Design,” and includes a summary of the years of predesign work that’s been done by MetroHealth and its partners, says Walter. “It’s the core moving forward,” he says.

The binder also includes interior and exterior design examples that were chosen by employees during a transformation open house in late 2017. Designers will not copy or mimic those favorite designs, but they will use them as inspiration, Walter says.

More important than the images, he says, are the written comments and feedback from the staff. These include such suggestions as “match the forms found in local geography;” “reflect innovation, advancement and competence;” “make a warm and inviting entrance;” and, simply, “timeless.”“We’ll actually be using those comments and creating imagery inspired by those words,” says Walter.As the architects and designers come up with schematic ideas and those ideas evolve, they will be tested against and revised around the concepts in the “Basis of Design” book, he says.

They will then solidify the concept for design.Walter says we want our design to take advantage of our geographical presence as a gateway into Cleveland but also to reflect our presence in the health and well-being of the community.Once the team solidifies the schematic design, they will move into the next stage of the project: design development, when details are developed, materials selected, systems chosen and when our team figures out how we’re going to actually build what we’ve designed.