The case of the missing bird SOLVED 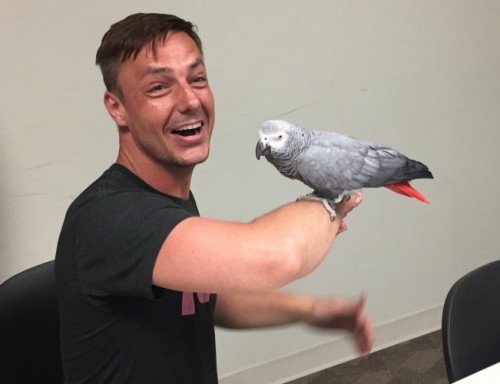 As Dr. Megan Thomas was walking into work at MetroHealth’s main campus this morning, she noticed an unusual bird perched on the roof. This wasn’t just an ordinary dove or cardinal. It was Honey, an African grey parrot who’d escaped from her home on the near west side.After a day spent with the MetroHealth Police Department (that included her television and Facebook Live debuts) we reunited Honey with her owner, Greg.

Even though this story had a happy ending, it was a long day for everyone involved. After Dr. Thomas noticed something seemed wrong, she contacted MetroHealth Police. With a little bit of encouragement from an open window, officers coaxed Honey inside, and she happily rode on their shoulders back to MHPD headquarters.

The next challenge was to find the missing bird's owner.

Even though African parrots are known to learn more than a dozen words and put together complete sentences, Honey wasn't talking.

Not one to let her feathers get ruffled easily, Police Dispatcher Lisa Spencer worked hard to solve the case of the missing bird. "We were calling everybody," from rescue organizations to pet shops, she said. After what felt like forever, she had a breakthrough. The last pet shop Lisa called identified Honey’s owner by the serial number on her leg tag. It turns out she’d flown the coop earlier this week from her home not far from MetroHealth during bath time.

What’s next for our new feathered friend? For starters, she’s going home to watch her favorite movie, Shrek. But that doesn’t mean she’s totally off the hook: “She’s in trouble, definitely!” Greg laughed.

The case of the missing bird SOLVED