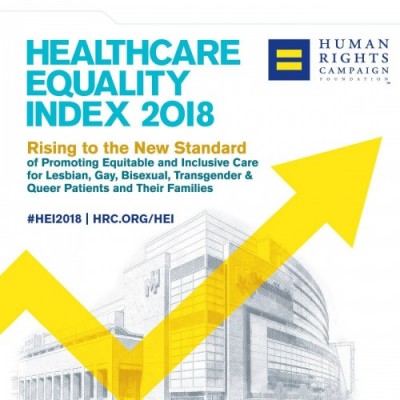 The 11th edition of the HEI marks the second year that participants are given a numerical score based on their LGBTQ-inclusive policies and practices. HEI participants are given scores in four criteria: foundational elements of LGBTQ patient-centered care, LGBTQ Patient Services and Support, Employee Benefits and Policies and LGBTQ Patient and Community Engagement. Participants that receive the maximum score in each section earn the coveted status of “2018 LGBTQ Healthcare Equality Leader.”

Of the hospitals who did not participate in the HEI but were scored based on research, only 63 percent have patient non-discrimination policies that include both “sexual orientation” and “gender identity,” and only 53 percent were found to have an LGBTQ-inclusive employment non-discrimination policy. The equal visitation policy, at 93 percent, is the only one that comes close to matching the rate of the participating facilities.

The Human Rights Campaign Foundation is the education arm of America's largest civil rights organization working to achieve equality for lesbian, gay, bisexual, transgender and queer people. HRC envisions a world where LGBTQ people are embraced as full members of society at home, at work and in every community.