The MetroHealth System completed the sale of $945.7 million in hospital revenue bonds today. The bonds will fund the campus transformation on West 25th Street, including the building of a hospital with 270 private rooms, a new central utility plant, new parking garage and several other essential projects.

Next, MetroHealth will select a Master Architect of Record for the campus transformation and a Construction Manager at Risk for the new 1200-1500 car parking garage. The Board of Trustees will approve the chosen firms at its board meeting in June. MetroHealth plans to start building the parking garage at the end of summer. 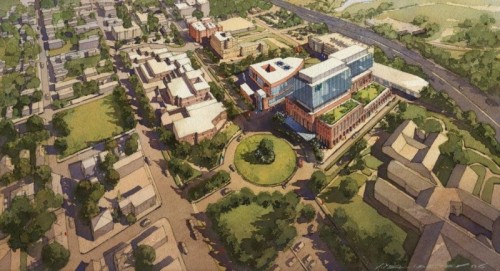 The campus transformation is not only going to improve care for patients, it’s going to boost the health of Cuyahoga County’s economy as well, according to a new study by Cleveland State University.

Over the course its nine-year timeline (2015-2023), MetroHealth’s transformation plan will support 5,618 new and existing jobs and result in $873.3 million in total output of economic benefit for Cuyahoga County, according to a new report from Cleveland State University’s Maxine Goodman Levin College of Urban Affairs. In addition, the project could generate more than $95 million in new local, state and federal tax revenue.

“The Campus Transformation … will generate significant returns to the city and county based on projected local spending,” the researchers concluded in their review of the project’s economic benefits.

The study says the city of Cleveland will see most of the impact, with more than 3,200 jobs created and a total economic benefit of more than $513 million.

MetroHealth has also set strong diversity goals for the transformation, including the hiring of at least 80 percent of workers from within Cuyahoga County, a minimum of 20 percent African American and 10 percent Latino. In addition, at least a third of the contractors, vendors and suppliers will be minority or woman-owned businesses.

“From the very beginning in 2014, we said that the campus transformation was more than the rebuilding of a hospital, it’s about the economic rebuilding of the near Westside,” said Akram Boutros, MD, FACHE, president and CEO of MetroHealth. “We already provide more than 7,400 jobs to Greater Clevelanders, and provide well over $1 billion a year to the local economy. The transformation will only amplify that.”

The first phase of the campus transformation project started in 2015 with the demolition of the Northcoast Behavioral Health Care Facility and the construction of the $82 million, two-story addition to the existing Critical Care Pavilion, which opened in July 2016.

In March, the hospital system’s board of trustees unanimously approved a plan for MetroHealth to self-issue up to $1.3 billion of bonds to pay for the transformation plan. No taxpayer money will be used for the project.

Cuyahoga County is supporting the project, obtaining a Letter of Credit at an annual cost of $350,000, which will save MetroHealth up to $160 million on the total cost.

Bank of America Merrill Lynch and JP Morgan Securities are co-senior underwriters for the sale of the bonds. Kaufman, Hall & Associates has acted as MetroHealth’s financial advisers for the campus transformation since 2015.