Cleveland - Twelve-year-old Delton Beckman left MetroHealth’s Burn Care Center on January 26, 2021 with the Burn Survivor Medal around his neck. Delton, who lives with his family in Grafton, is the first recipient of the medal, given to pediatric patients who stay for an extended time in the Burn Center.

Delton was at MetroHealth for nine weeks, recovering from second-and third-degree burns on 40% of his body. He was injured at a former friend’s house on November 23, 2020, a few days before Thanksgiving. The other boy, burning plastic covering off the copper wire, retrieved a jug from the garage filled with liquid. He tossed the liquid onto the flames, then threw the jug across the yard and ran in the opposite direction. 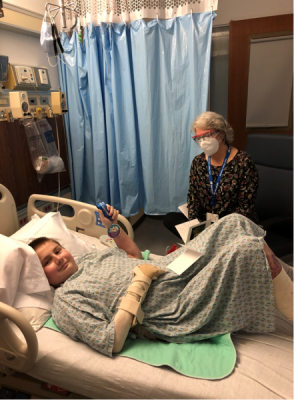 A gas tank leaning against the backyard fence exploded. Delton, less than 15 feet away from the tank, started to run. It was only then that he noticed flames surrounding him, his clothes on fire. He wanted to “stop, drop and roll” to put out the flames, but he couldn’t. The back yard was full of scrap metal and car parts. So, he kept running – through the gate to the front yard – and jumped into a ditch.

Delton ended up with burns to his back, right arm and hand, and both legs. The other boy was not hurt.

“My right arm was probably the most painful thing,” Delton said. “They had to cut away so much tissue because the burn went so deep.”

The doctors told him that he’d be in a lot of pain and that he’d have to learn how to walk again – that it would take some time for him to get back to his everyday life. They also told him he would get better.

The doctors were right, Delton said. “One of my dressing changes right after the incident kind of made me woozy at first when I first saw it, but then I’ve just gotten used to it.” The pain has slowly gotten easier to deal with over the last few weeks, he said.

The Burn Center treats both adult and pediatric burn patients, including around 40 pediatric inpatients in a year, ranging from infants to teens. Only a few have burns as severe as Delton’s, said Justin Dvorak, MD, one of Delton’s trauma surgeons.

Delton’s age has been a huge advantage in his recovery, he said.

“With third-degree burns, the more surgeries that are needed, and the higher likelihood that someone may not survive,” Dr. Dvorak said. “He had a total of nine burn and plastic surgeries.”

Delton’s parents, Curtis and Paulette, say their son has always been strong and resilient. That became even more apparent with each surgery he endured; the last one was on January 12, 2021.

“He is a phenomenal kid,” Curtis Beckman said. “To see what he went through ... it amazes me how strong he is.”

Added Paulette Beckman: “I know he’s a strong boy but the past few weeks, I’ve seen above and beyond what I ever imagined.”

Delton’s mental strength and toughness, and the support of his family and the Burn Center staff all have been key factors in his recovery, Dr. Dvorak said.

“We have a dedicated and talented staff here – nurses, physical and occupational therapists, nutritionists – all of whom are extremely important to ensure that we function as we should,” Dr. Dvorak said. “Having Child Life, art therapy, spiritual care, social workers and case managers available has contributed significantly to the care Delton received. He’s had a great attitude throughout all of this.”

The goodbyes to the staff in the last few days before going home were filled with emotion.

“Some of them connect to you almost like they want to be a part of your family,” Delton said. “I have quite a few favorites. We kind of lost count.”

Delton is getting physical and rehabilitation therapy at home but will return to MetroHealth’s Main Campus as an outpatient a couple times a week to get his dressing changed. He’ll also undergo more therapy for six months to a year to help regain strength in his right hand and ensure that his scars heal without complications.

He’s looking forward to getting back to school (online classes for now) at Midview Middle School, where he’s in the seventh grade. And when he’s strong enough, he wants to get back on his bike as soon as he can.

Friends have been checking up on Delton to see how he’s doing but they haven’t asked him much about the accident. Now that he’s out of the hospital, Delton says he wants other kids to learn from his experience.

“Things can happen so fast. All it takes is one mistake,” he said. “I can’t imagine what it would be like for my parents and sister if I had passed away.”