Vandalized in November, the mural at the heart of our neighborhood is getting restored 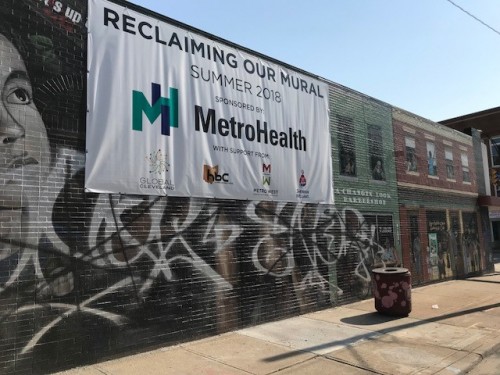 “It’s Up to Us” isn’t just the title of John Rivera-Resto’s more-than-1,900-square-foot mural on the corner of Clark Avenue and West 25th Street. It’s a rallying cry for our Clark-Fulton neighborhood, an expression of the people and culture that make the area around MetroHealth’s main campus so special. That’s why the community was so upset after the mural was vandalized last November. But, in true Clark-Fulton fashion, the neighborhood has come together to repair the art. After months of preparation, the restoration will get underway June 1.

John has a lot of work ahead of him. Repairing any work of art is tricky, and that’s especially true when your piece is 108 feet wide and 18 feet high. But he’s not doing this alone. Partners throughout the community have come forward to help, and we’re proud to be one of them. Sherwin-Williams is donating paint and brushes, the Metro West Community Development Organization is coordinating the project’s planning, and we’re covering most of the costs associated with the restoration.

Originally, the mural took John more than two years to paint. The restoration could take almost as long. Instead of starting with a blank wall like he did in 2012, he’ll carefully have to strip away the graffiti, preserving as much of the original art underneath as possible. Once the vandals’ tagging has been removed, John will begin the painstaking process of matching new paint to his original designs.

We can’t wait to see “It’s Up to Us” back to looking its best at the heart of our neighborhood.

Why does a health system care so much about a mural? For one, because the Clark-Fulton community is our home, and we want to help keep it a clean and welcoming place to live, work and play. We also know that interacting with art has very real benefits to people’s health.

“It’s Up to Us” is more than a piece of art, and the way our community has rallied to restore it proves that. No matter how much spray paint you use, you can’t cover up a neighborhood’s spirit.

Vandalized in November, the mural at the heart of our neighborhood is getting restored